On the seventh day, the Hyundai discovered Mount Rushmore, OHMMMMMM.  We left Rochester, MN in the middle of nice blizzard but soon ended up with sunny skies and 60 degrees somewhere in South  Dakota.  Most of this drive was flat and mind numbing though there were plenty of tremendously terrible handmade billboards for things like 6 ton prairie dog statues and a place called The Cosmos Mystery Area which claimed to be BIZZARRE!  The makers of Spam, however, did a great job with their ads for the Spam Museum.  Our favorites:

It was also VERY windy with the wide open plains.  This guy’s bike was nearly at a 45 degree angle and not looking too stable.  We also made an important discovery somewhere in South Dakota – every weird shack on the side of the road or cadaverous looking local walking the rest area side streets was either a meth head or a cannibal.  In fact, we contacted Rand McNally to inform them we had changed the local area to Cannibal County.  Though probably unfair and maybe untrue, we enjoyed deciding whether we would end up as a Northeastern Meat Stew or getting stabbed with a spoon by a tweaked out meth head.  I don’t see this area as a potential retirement destination. 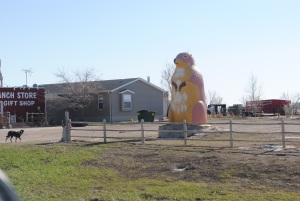 We spent the night in Rapid City which was about an hour from Mount Rushmore.  After checking into our cannibal ridden Microtel, we were fortunate to find the historic downtown.  The lady at the front desk suggested Golden Corral for dinner on the nearby strip so we were on our own which worked out well.  We found a place on the TV Food Maps guide called Firehouse Brewery.  It was an old fire house converted to a brewpub.  They brew their beer on the premises and the food was pretty good.  We also did our usual job of not blending in when the waiter had to ask twice what we said when asking for water.  He claimed we were speaking in a foreign tongue.  All in all, a good day of travel.