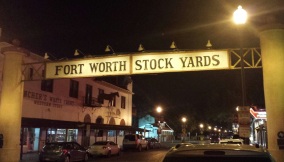 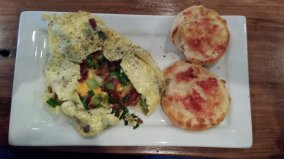 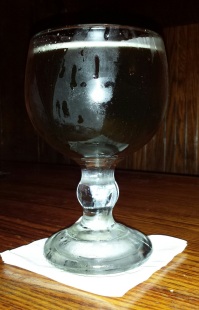 On this day, we headed into Clarksdale for breakfast hoping against hope that our options wouldn’t be limited to Mickey D’s and Subway.  Mercifully, we discovered Yazoo Pass, a café boasting the tagline ‘Always Fresh, Always Friendly!’  They should include ‘Always Tasty’ in there because it was easily all 3 of those things.  In a town that looks a bit old on the surface, this place was a burst of clean, bright niceness.

We were greeted with smiles and dynamite food.  I had the YP omelet with green onions, bacon and cheddar plus biscuits.  The omelet was super fluffy, the fillings were very fresh with a nice bite from the onions.  The biscuits were clearly homemade and glorious.  You, reader, should go there for breakfast right now.

After this meal of deliciousness, we checked out of our lodging of radness and hit the road for the Dallas area.  For lunch, we decided Cracker Barrel was a must, at least once during the trip. Roughly, they have a billboard every 3-6 feet from NJ to CA so it’s hard to ignore.  Dave had an odd looking salad with 2 giant triangles of yellow ‘cheese’ on the side.  He dared me to eat them, I dared him to touch them with bare hands.  In the end, they stayed right there on the edge of the platter, solid and unmoving.  My turkey sandwich had the calories required to suppress my hunger monster annnnnd that was about all.

On the topic of Cracker Barrel, does anyone know the process behind their interior decorations?  It looks like the items were ransacked from a flea market in rural Kansas, circa 1852.  But upon closer examination, there are barcodes on every single item.  We wondered, can you buy this crap?  Or are the barcodes there from when they produce the items by the truck load, at a factory in China?  Though it appears to be totally random, we theorized that if left to their own devices, each Cracker Barrel would have a seriously bizarre mix of doodads on their walls.  I mean, what would the directive be for this sort of thing?  “To maintain the CB brand, please decorate your establishment with lots of random shit that looks sort of old and American-y.”  We decided the mass produced China route with specific guidelines was more likely.

The main stop for this leg was Gas Monkey Garage, made famous by the TV show ‘Fast ‘N Loud’ on Discovery.  If you haven’t seen it and have a passing interest in cars, check it out.  The 2 main dudes are pretty awesome, regularly souping up cars and blowing donuts in their parking lot.  I’m a big fan and though the main shop was closed for filming, we did get a glimpse of Bearded Wonder Aaron Kaufman, the master mechanic.  I bought a shirt, the super friendly girl running the swag room did some cheerleader moves and we generally had a great little visit.

From there, we did a quick jump to the historic stockyards of Fort Worth.  Dave discovered this section of the city and it turned out to be pretty cool.  It’s where all the cattle were bought and sold way back when.  Today, it’s got all the history you can stand plus lots of great bars and restaurants.  We had dinner at H3 Ranch which is known for steaks and barstools made out of horse saddles.  We decided that sitting on a big goofy saddle for 2 hours wasn’t happening and instead grabbed a booth with 3 stuffed buffalo heads observing us from the wall above.  The local Buffalo Butt brew was served in a glorious schooner and was really good.  We both had top shelf steaks and I ordered the homemade peach cobbler to go.  What I didn’t count on was them filling the to go container to the point of overflowing with the peachy goodness.  Even I, known for possessing a hollow dessert leg, could not put down this 5 pound pile of goo.  We DID however sleep quite well.