Christmas is coming and we’re soaking it all in here in Switzerland. Some traditions are new, some familiar and some have left us scratching our head. But I would say that on the whole, Christmas is a bigger deal here than in the States. We’re in a smallish city and it looks like Santa’s workshop everywhere you go.

For instance, the jewelry store around the corner has decorated the outside of their windows with stacks of cut wood, trimmed with garland and holiday trinkets. And that’s just the outside. There are many topics to cover, today we’ll look at advent calendars.

I’ve been out of the advent calendar scene for many years so perhaps I’m just not up to date on the happenings in this industry. I remember, as a kid, calendars that you opened each day to find a piece of chocolate inside. Knowing that a Swiss human eats around 20 POUNDS of chocolate per year, I figured we’d have plenty of options. On a side note, Americans eat roughly 9 ½ pounds of chocolate, per person, annually. And they say we’re savages!

As expected, there were endless selections of chocolate themed advent calendars. The stores are stuffed to the gills with them. At the other end of the scale, you could spend nearly $50 on a calendar that reveals a different plastic doodad each day, culminating in a fully functioning remote controlled drone. EXCUSE-MOI!?

We went for the middle ground, thinking in our infinite wisdom we would be doing the kids a favor by not serving them candy each morning. PlayMobil makes advent calendars that unveil a new toy each day leading to the creation of a fully functioning play set. Pirates are a theme – which Hendrick chose – or farm animals – Maren’s pick. Milan, however, keyed on the calendar with shiny jewels all over the packaging.

1 of 4: A seemingly innocuous lineup of advent calendars

Now, before I nominate Sarah and myself for the 2016 #ParentingFail Award, let me explain our situation. Picture a Swiss FAO Schwartz (the NYC store) with tremendously complex Star Wars and Frozen displays dominating the décor, covered in blinking lights and buttons that make R2 D2 beep-beep-bops when pressed. Rube Goldberg styled elf scenes hanging from the rafters, candies up the wazoo, toys to sample and endless opportunities for curious children to make a mess. As I said, the Swiss dig Christmas.

We know that our best bet for maintaining sanity is to visit a place such as this early, before the crowds show up. But it made little difference. Release our kids into this wonderland and it’s bedlam. Every second is spent failing miserably at keeping toys on shelves, things unbroken and basic parenting. So when the little humans were rifling through advent calendar options, we were more than happy for Milan to take the one “that has jewels on it.”

A closer look would have been helpful. This advent calendar is centered around cops and robbers who are perpetrating a jewel HEIST. Not sure what this has to do with Christmas but that’s another story. Thus far – 5 days into December – we have successfully created a jewel thief, replete with: 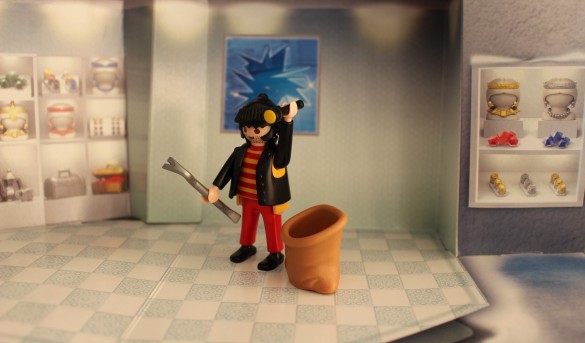 3 of 4: Mr. Thief checking out the shop with his flashlight and crowbar. Loot bag at the ready.

I don’t know what’s worse. Our daughter wheeling around a pretend container of flammable gas used (apparently) for stealing jewelry. Or the shocking ease with which I lie to her. 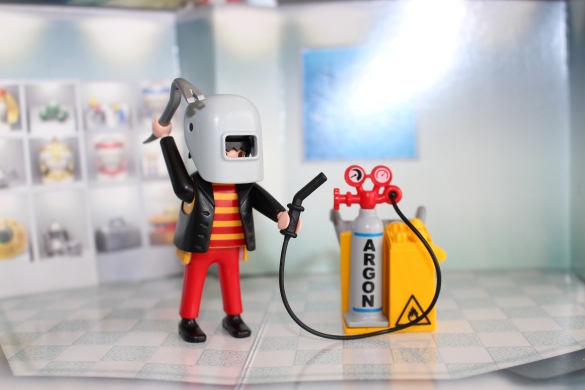 4 of 4: Ready to tear the joint up with his rolling tank of ARGON and welding mask. Uh, Merry Christmas?

So, great success on the concept of calendars filled with toys and I have to give PlayMobil some props for their incredibly intricate toys. But epic fail for execution of theme. I accept full responsibility for missing this one but really PlayMobil? Merry Christmas, may you receive a bag of stolen jewels!