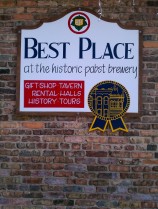 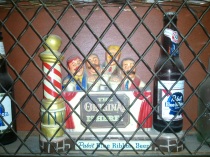 Over breakfast at the Brewhouse I learned that there wasn’t just a Mr. Pabst but a Captain Frederick Pabst and he was pretty much the man.  When a VIP came to visit the joint back in the 1800’s he had one of his workers showcase his love of Pabst by downing a fire bucket full of beer in one fell swoop.  As if I didn’t love Pabst enough already.  Before checking out, I couldn’t help but jack the metal ice bucket with a Pabst logo from the room – Sarah will be thrilled.

Next stop was the tire store where we got 2 new front tires.  The day before, Tyler decided to play chicken with a pothole the size of Minnesota.  We had a lovely bubble on the passenger tire that looked a bit flimsy for highway cruising.  After the tires were installed by a local walrus probably named Bluto (though a very nice Bluto), we decided to check out the Pabst  gift shop which just capped the Milwaukee visit.  It was jammed full of even more Pabst logo’d shit than Magic Hat.  They also had stuff from Schlitz, Stroh and Old Style, wow, just wow.  After restraining ourselves from buying everything, we checked out the old Pabst brewery bar which must have been used for lunch breaks back in the day.   It had strange gypsy drawings on the walls and dusty old beer bottles on display, glorious.

Praying for surf in Sheboygan

From Milwaukee we headed to Sheboygan, WI with a plan to surf the Great Lake of Michigan.  We found REV surf shop and talked to the owner who was a super nice guy with  strange lake stories of miniature tsunamis and ½ inch tide swings.  I was going to ask him if there were any monsters in the lake but was afraid he’d think I was weird.  He directed us to the lake front but said it was probably too windy and sloppy for surfing.   We got there, the wind was howling, it was COLD and there was thunder and lightning in the black sky behind us.  Though tempting, we decided pictures would suffice as this was a precursor to the foot of snow that was coming through.  We got some food at local spot staffed by angry (looking but actually very nice), tattooed skater chicks and populated with chilled back locals.  Coffee was good.

The Mississippi, in all it’s blurry glory 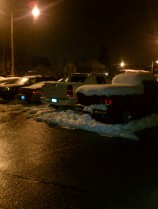 Last stop for the day was to be Rochester, MN which we barely made it to as a result of the freak snow storm that dumped 14 inches on some areas.  I-90 at 8:30 PM is pretty dicey at night with snow coming down, the wind howling across the open plains and virtually no one on the road.  We were happy to get to the Best Western and be done for the day.