Zoom in, there’s an airplane up there

Fitting name for this place

A statue of Dave we found 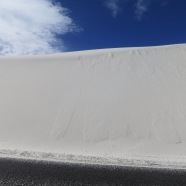 Bigger than it looks

There’s a tiny little man up there

Nearly impossible to capture this shot thanks to the sun

Where the hell are my keys?

Might be some missiles flying around, no big deal

With a wonderful recommendation from my wonderful wife Sarah, we left El Paso and headed for White Sands National Monument in New Mexico.  My sister Caroline and Sarah’s friend Anne had both visited this national park and were both in awe of it.  We quickly realized why.   The park is a series of massive white gypsum dunes covering 275 square miles.  Standing within the park is what I imagine being on the moon is like, otherworldly.  Once inside, our only regret was not grabbing sleds at the visitor center.  The 40 foot plus ridges were made to be sledded upon. We made up for it with running leaps off the edge of these cliffs.

The other interesting fact was the park being within a national missile range.  Occasionally the roads around White Sands are shut down to ensure no visitors become errant missile fodder.  Watching fighter planes zoom around above us only made it cooler.  And I found out after the fact from the father unit, Richie, that the air force base launching these jets in Alamogordo, was the same base my grandfather was stationed at during World War II.  Very cool.

From here we stopped in Las Cruces, NM for a quick bite to eat.  The diner was standard fare.  The week old Valentine’s Day cupcakes forcibly sold to us were not.  Hard icing, dry cake and an enthusiastic waitress watching us eat them was super duper.  Fortunately, the hotel motel next door claimed to have the World’s Largest Chili Pepper.  Looked pretty damn big to us and of course entailed a photo op.  We then hopped back on the road for the drive to Scottsdale.  But not before I nearly crashed the car thanks to a tumbleweed flipping down the road directly at the front bumper.  Having never seen one of these, I was shocked to find out they are identical to those found in Bugs Bunny cartoons.  But as it comes bouncing down the road, 3 feet in diameter, it appears you’re about to be slammed by a gigantic ball of twine, hence my overly dramatic reaction.

I would be remiss in not sharing Dave’s coffee experience at McDonald’s during this leg of the drive. When he asked for a cup of decaf, he was informed the pot was empty but they’d brew him a fresh one.  Thinking Mickey D’s coffee is like the food and ready in minutes, Dave headed for a bathroom break while waiting.  Unfortunately, it was more like 15 full minutes for the brain trust behind the counter to assemble his elixir.  Muttering with irritation at the ineptitude on display, Dave hopped behind the wheel and headed out of the parking lot.  As he began the sentence “What did I do with my cof…” he simultaneously threw out phrases like “Dang It” and “Oh Shoot” while watching his hard earned café flip off the roof and splatter all over the parking lot.  There may have been some ensuing laughter, but we can’t be sure. A few hours later Dave also experienced the shocking sensation of a tumbleweed encounter but at 80 miles per hour instead of 35.  The Audi appeared unscathed but the same can’t be said for the collective undergarments in the car.

We got to the Wagner’s house in Scottsdale at about 7 PM, very much looking forward to sleeping in real beds.  Mr. and Mrs. Wagner were so nice to have us for the night and fill us with pizza and beer.  It was really a great visit, catching up with them, having some laughs and sleeping in real rooms with a real shower in the morning!  THANK YOU WAGNER’S!!!! I also got a quick visit with Katie Zentmeyer at Four Peaks Brewing Company down the road where I thoroughly enjoyed an Oatmeal Stout.  Katie was nice enough to drive to us, correctly assuming we were likely fried from the drive.  As usual, it was great catching up with Katie and the beer was tasty too!

The next morning, Mrs. Wagner made us breakfast (THANK YOU) which was an EXCELLENT change from the food we’d been finding on the road.  And then Jeff came over and we all got to catch up for a couple hours.  It may be nearly 10 years since I’ve seen Jeff so it was really nice to get together and catch up on life, tell funny old stories and sit in the glorious AZ sun.  All in all, the Scottsdale visit was a highlight of the trip and a huge thank you is owed to everyone! 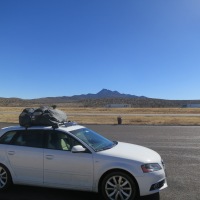 Today we woke up in preparation for a full day of driving.  I have already blocked it out but I believe it was a 9 or 10 hour day.  And down this far south, there is not a whole lot going on.  Along with the loooooong, straiiiiiiiight roads, the thermometer touched 90.  Though the Audi was blowing cool air, it wasn’t cold but it was better than windows down.  Apparently wild wind is an every day occurrence in these parts.  There were multiple signs urging ‘Extreme Caution’ and ‘Dust Storms May Exist!’ Actually, there was no exclamation point but the bold red lettering made it feel that way.  We did not encounter any zero visibility conditions but with the windows open, the howling wind made it hard to hear, think or breathe.  Windows up.

In general, we were blasting BPM and Lithium on Sirius the whole time.  A little house followed by some music of the 90’s kept us running.  At one point, requiring food, we ended up in a Subway that has surely been forgotten by the mother ship.  This shack on the side of the road looked very off the beaten path but was really the only option.  The guy behind the counter asked me if I wanted eggs or eggs white in my breakfast thing.  As he gestured towards the pile of limp yellow circles in a metal bin, I bit my tongue as my mind ran wild with thoughts like ‘Those are eggs?’ and ‘If that’s an egg, I’m Barack Obama.’

We got to El Paso and checked into a hotel that had beds but that you would likely not revisit.  Dave pulled out all the stops and got a workout in at CrossFit 915.  I did not.  That night for dinner we found a boutique burger shack right around the corner, Toro Burger Bar. Turned out to be a great find with a big selection of craft brews.  The Old Chub by Oskar Blues Brewery was especially tasty. Along with it’s ludicrous name it had the tagline ‘It’s like Sputnik!’.  Nobody knows what that means but everybody likes it.

We split the Toro Burger (pepperjack, avocado, Toro sauce) and the SOB Burger (swiss, onions, bacon, BBQ sauce) along with some sweet potato fries.  I deliberately enjoyed some lighter beers with dinner since they had a Double Chocolate Stout Float on the menu that I was salivating over the whole time.  When it came time to order however, I learned they were out of the stout and was crushed.  The bartender was extra friendly however and that along with the quality of the food more than made up for it.  Oh, and I subbed a 1554 by New Belgium for my float that was chocolaty and glorious.  From there – straight to bed.