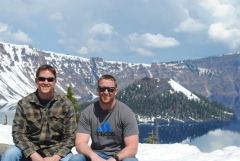 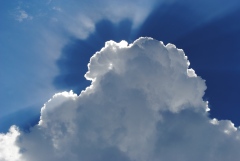 I had a strawberry Pop Tart on the road this morning.  Sugar robed in cake, smeared with sugar then sprinkled with sugar.  People eat these for breakfast and we have an obesity epidemic?  Weird.  Good sugar high and crash though.

So it turns out Richard’s stories of the mystical Crater Lake were 100% accurate.  This place is outrageous.  Though the roads were clear, there was at least 10 feet of plowed snow in the parking lot and the view over the lake was mind boggling.  With no wind, the water was ultra glassy showing off perfect reflections of Wizard Island. It’s out of the way but a must see for anyone in the vicinity. 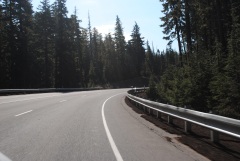 Hyundai – Way of the Samurai! 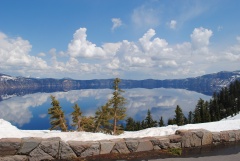 Along with the view and snow we got to meet a fellow road tripper.  His name was likely Gomer.  He looked as though he’d been driving and/or awake for 4 days straight.  He mumbled something about going to Minnesota, Washington D.C. and now Crater Lake.  Sounded weird but not as weird as his slack jaw, doe eye stare.  Lock the doors, roll up the windows and RUN. 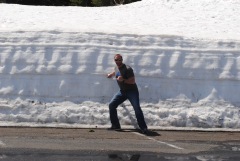 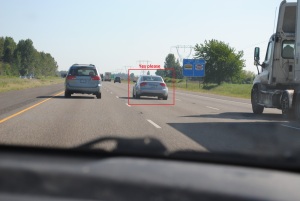 As a sidebar – Sarah would be proud of me.  After visiting the restroom upon arrival, I managed to browse the gift store, walk around the park and talk to strangers with my fly open the whole time.  I’ll blame my complete lack of awareness on 5000 miles in the car with that tattooed bear who is Tyler.  When I brought his attention to my faux pas, he just smirked and shook his head. 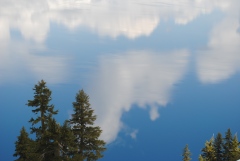 Since this part of the drive took much longer than expected we headed straight for San Francisco, during which we made an important discovery.  We’d left the land of carnivorous meth addicts and entered the domain of gnomes, hobbits and in the parlance of Tyler “Narnia or some shit”.   We also had a great automotive experience.  Cruising along at 70, Tyler ID’d an Audi RS4 rocketing up the road on the right.  The driver got bottled up and we got a peek at the occupants.  A woman in her mid 70’s driving with a similarly aged male passenger.  In the back window was a Ferrari sticker.  She then carved up the bottleneck and stood on the gas.  EXCELLENT.

We made it San Fran around 9 after a white knuckle drive across the Bay Bridge through Treasure Island.  It was seriously windy, the bridges were LONG and packed with squirrelly local drivers.  We picked up pizza and beer to meet at Tyler’s friend, Micah’s, place. He was nice enough to sacrifice his bedroom for our smelly selves and we were out shortly after arriving.