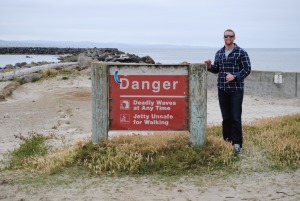 We had our first real California Mexican meal this morning.  Though the Mexican food is surely better closer to San Diego, it was nice to see it offered.  We then made way for Mavericks in Half Moon Bay.  Though the water was flat, we met a local wingnut named Lou that was busy taking pictures with the largest of 3 huge cameras around his neck.  Though crazy, he was nice, pointing out where the wave breaks and explaining the memorial to Mark Foo.  I’m sure Tyler will be back on a big day to see the madness in action.

Next step was Monterey to catch up with Tyler’s friend Lucas, his wife Jackie and their 8 day old son Hudson. We would have stayed longer but as we’d been doing from the get go, the actual distance we planned to travel was MUCH more than expected.

It was time to go and though the Hearst Castle was on the list, our need to get out of the car prevailed and we went for I-5 south instead. The highlight of this drive was In ‘N Out.  Some say there are better burger joints in CA.  I’m sure that’s possible but it doesn’t negate the fact that In ‘N Out ROCKS.

Though we got to Anaheim later than hoped, the upside was bypassing the LA traffic everyone had warned us about.  And we still got to hang out with Katie Z which was EXCELLENT.  She was super nice to let us crash in her suite for the night.  But she took the pull out couch and gave us the king bed which was really great.  Before bed, we had some hilarious conversation with Katie and her co-workers over a few beers.  My favorite new word was coined  – Douche Kebob.  All in all, a good time and a really good nights sleep.