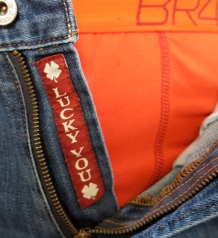 My brother, Tyler, recently started a new job and shared with me a HILARIOUS story about his 6th day there.

After a lunchtime visit to the restroom, his pants decided to NOT zipper back up.  And not just stuck, but both halves of the zipper were completely unattached.  That’s right, maximum airflow and embarrassment.

But Tyler was not deterred in the quest to hide his peter.  First he tried a stapler.  Then he channeled #RubeGoldberg using a paper clip that would somehow affix the edge of the fly to a button hole.  At this point in the conversation, I was incoherent with laughter.  Envisioning this attempt to staple his fly shut without clipping his wang was too much.

He even asked his friendly co-workers for a BOBBY PIN with no luck.  So for the rest of the day he was forced to hold his hand awkwardly over his crotch.  I’m sure no one in the office found it funny that the new guy appeared to playing with himself all afternoon.  I certainly didn’t.

3 thoughts on “Is There A Draft In Here?”