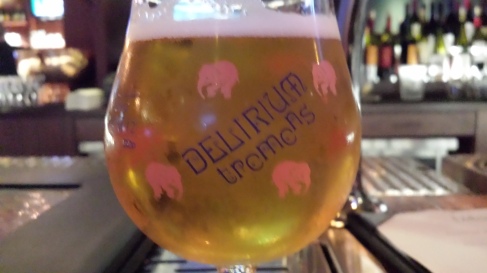 The Pink Beer of Elephants

Last night, I enjoyed some grog with Young David.  Known by many names, perhaps he is best known as Druss – all natural, never from concentrate.  We went to Delicious Heights, a fine establishment here in Berkeley Heights.

After pulling up to the bar, my eyes were immediately drawn to the tap sporting a dancing pink elephant and the text Delirium Tremens.  Being unfamiliar with Pig Latin, I promptly ordered a vessel to learn more.

Turned out to be more of a swill than the golden elixir I hoped for but the decorations were enough to make me wonder about this beer.  Here’s what I found.

Latin for “shaking frenzy”, also referred to as The DTs, “the horrors”, or “the shakes.”

Hmmm, maybe NOT what I need to be drinking.

By zooming way out on Google Maps, I learned this codswallop comes from the Huyghe Brewery in Belgium.  Even translated to English, the website did me no good on discovering the origin of this strange brew.

Upon further research, I found a review on the Beer Advocate site.  I was unaware there were people out there capable of writing in such ludicrous terms about their thoughts on a particular beer.  My thoughts are usually “It’s good” or “I liked it”.  So, I channeled my inner Shakespeare to describe Delirium Tremens as a connoisseur of this malty man love might.

*These online reviewers use lots of numbers and letters to describe their feelings.  I went with a quick thought followed by a more in depth look at the category.

Look: RAD – it’s got a pink elephant on the tap
Neato snifter had the same pink proboscidea.  Small head that smears the side of the chalice, just the way I like it

Smell: Weird but exciting
Peculiar and hard to place until tasted (see Taste below)

Taste: Like old candy bubble gum and cigarettes.
Pure weirdness with a hint of carnival-ride-operator hands

Feel: Its beer, it always FEELS good
I’m guessing the M used on the Beer Advocate site, in this category, stands for Manliness or Mouthfeel. Can’t be sure, but both are funny words.  For Manliness, the Delirium is Sub-Poor but for Mouthfeel it seems to feel like Beer.

Overall: Pink elephants that taste like bubble gum and cigarettes are not my kind of hallucinogenic cartoons
But in reality, I’m mixed.  The tap at the bar made me immediately want this barley juice over all others.  Then the fancy goblet it arrived in was decorated with the same pink Disney acid-trip mammals.  So there’s that.  And the text I sent to Tyler about these dancing proboscis’ haunting his dreams made me laugh HEARTILY.

On the other hand, it tasted like candy bubble gum (my take) and/or cigarettes (Young David’s take).  Bottom line – I didn’t finish it which is NEVER a good thing.

Did You Know Beer Tip of the Day

The word GROG is a derogatory term for beer coined in the 1860’s.  According to BellaOnline :

This term was in honor (or dishonor) of Admiral Edward Vernon who wore a grogram cloak, thereby acquiring the nickname “Old Grog.”  He went down in history for diluting rum in lime-juice and water, and dispensing it to his sailors.  As a side benefit, the Vitamin C in the lime-juice helped to prevent scurvy.  Throughout the world, his sailors came to be known as “Limeys.”