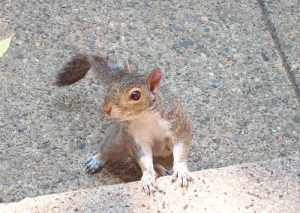 The other day, I popped the hood on my car to fill up the windshield washer fluid tank.  As I lifted it open, a squirrel blasted out like a jack in the box.  Needless to say, I swore like a sailor, almost had a heart attack and nearly fell off my driveway into the neighbor’s yard.  Mercifully no one was to around to bear witness.

The fuzzball had gathered several pounds of leaves and sticks into some kind of nest right on top of the motor.  Muttering curses, I grabbed the leaf blower and proceeded to jam it in every available opening to clean out the mess.  And was again grateful that no one was outside to see me in action.

I’ve been opening the hood every time I get in the car now to make sure it’s un-nested.  I also hold the garbage can lid in front of me like a medieval shield.  Wouldn’t want to get attacked by another murderous rodent.  Fortunately, there has not been a repeat offense but Richie, the father unit, made a good suggestion on checking out options for deterring this in the future; via some online searching.  And wow was I in luck.  Not only have other people had this issue, they’ve had the benefit of suggestions from every nitwit on the ‘net.   Here are some faves:

I have heard that ferret urine will deter squirrels. A local pest-control guy I know uses it on cotton balls and places them in spaces where squirrels have nested…He gets the used litter from ferret cages at the pet store. Maybe get some from your local pet store and seal it in a bag with a towel and let it marinate for a day or so. Then place the towel under the truck or wherever you think might be the fuzzer’s point of entry.

Ferret urine.  In a bag with a towel to marinate. Into the FUZZER’S point of entry.  Hmmm.

Rags soaked with ammonia are a good deterrent — stuff them in all the openings where the squirrel could be getting in.

Stuff ammonia soaked rags into ALL the openings a squirrel could get in.  I’m not a chemist but this one just reeks of Darwin award.

Set…mouse traps in the engine compartment and around the car. Bait them with peanut butter, cheese or bacon. Roast the bait with a match or lighter to increase its aroma.

I’m conflicted here.  What’s more absurd – mouse traps in your engine bay or ROASTING the peanut butter before setting them?

This might sound a bit daft, but if you have a cat and you can leave it under the bonnet for a night, that could frighten the squirrel away.

A bit daft?  Stuff a cat under the hood for a night. See what happens to you when you re-open it.  Clearly, this clown has never been around cats.

Should have put the nest in a more respectable place. if you get a nest again have a cardboard box ready for it. don’t throw it away, or 2 boxes (one inside another) so it will appear warm for the thing. you can then feed it sometimes and use the trap once it has your trust.

I had to re-read this one a few times since it was written by a narcoleptic monkey on acid.  I’m gathering the writer was upset the poster had tossed the nest he found.  But these elements:  “warm for the thing” – “feed it sometimes” – “use the trap once it has your trust” leave me slightly afraid.

Have any experience in this arena? Got anything to add?  I’ll be sure to pass it along in response to this mind bender of an internet question.

2 thoughts on “Squirrels Are Eating My Car”