Life in Switzerland continues to be excellent. We’re getting the food thing figured out so, uh…. Well, that’s really THE most important thing. Why you might ask?

The tomatoes and bread here are insane

Not a green screen in the background

At breakfast, we feed our pack of starving children a bowl of yogurt with fruit and oats (which sounds like something you’d feed a horse) and a peanut butter and jelly sandwich. Then, depending on the tug-of-war between the parents’ level of morning befuddlement and the childrens’ level of demanding, eggs and meat. After this is consumed, we flat refuse to make more food despite their insistence of being hungry.

Lunch, thank the heavens, is served at school though we’re told they often politely ask for seconds. I wish they would politely ask at home. When they’re picked up from school, we bring a Tupperware that lately is stuffed with sliced fruit, hunks of Parmigiano Reggiano and oatmeal cranberry cookies. They wolf this “snack” down while we wait for the train (DO NOT put your fingers in the Tupperware at this stage) and then ask if I have anything else. I don’t. So they ask what’s for dinner. This is at 4 PM. I used to tell them what we would be having. It would go like this:

“EWW! We don’t like that”, they respond in unison. “Is it CHEESY rice?”

“Why yes OF COURSE it’s cheesy rice!” I lie in reply.

And on and on until I realized the better course of action was to feign ignorance on the dinner cart – “I don’t know what’s for dinner?” Now I can get them home without nuclear meltdown on the train platform. If dinner is satisfactory for the little carnivores, it becomes a contest of who did the best.

“I ate mine first!” one blurts out.

“It’s not a race.” comes my attempt at not failing as a parent.

“Did I eat the best Daddy?” is the next question.

“Well, uh, I don’t know” I lamely reply in another attempt at not creating a tableside pissing match between the 3 foot lunatics surrounding me.

Castle hunting with the chickens 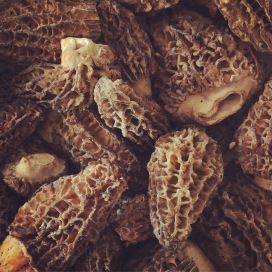 Morel mushrooms as far as the eye can see

My dad tells the story of his dinner table growing up. There were 2 categories of people at this table. The Fast. And The Hungry. If you were Hungry, but not Fast, you didn’t eat. You needed to be both to survive. And his dad was the all caps version – FAST AND HUNGRY. “Are you going to eat that?” my grandfather would ask as he forked someone’s meal into his mouth.

As such, I can very confidently say Grandpa Smiley’s soul has been passed down to our children. If one gets up for a bathroom break or just to screw around, the other 2 will circle the unprotected plate. After some furtive glances, they’ll begin the inhalation process while their poor sibling is rolling around the floor making cat noises. No one gets out alive.

There are some other things that have been happening in Switzerland besides eating but I would say food dominates about 80% of a given day. I’ll fill in the other 20% next time around.